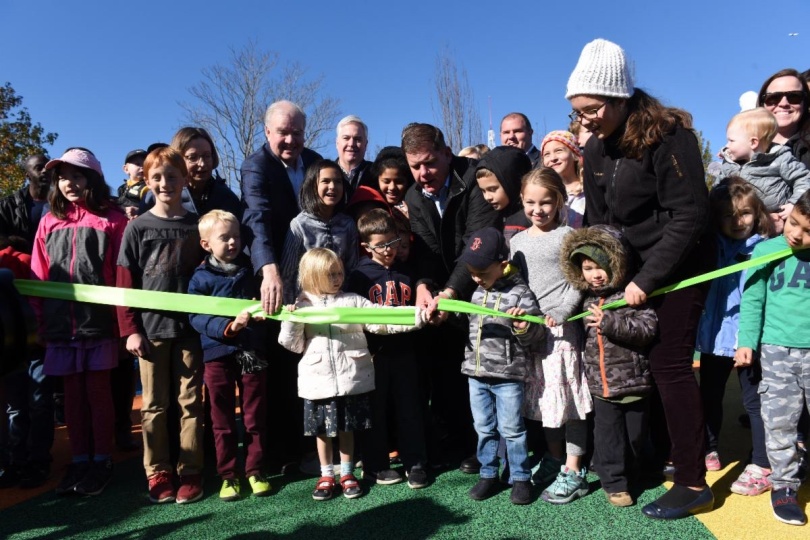 “Today is a great day in Allston, as we celebrate the opening of a new park and space for residents and families to enjoy,” said Mayor Walsh. “These green spaces support public health and well-being, they help bring neighbors together, and improve the quality of life for everyone. This is a gold standard park that represents the kind of creativity and accessibility we’re including in all new parks in Boston.”

“When undertaking improvement projects, the Boston Parks and Recreation Department always seeks the input of users and abutters during a series of community meetings where we ask what they want to see in their open space,” said Commissioner Woods. “As a result, we have a truly local park that will serve people of all ages and backgrounds for years to come.”

“It is inspiring to see such a remarkable transition of Smith Playground,” said John Bruno, a lifelong North Brighton resident and chair of the Harvard Allston Task Force. “Enhancing the green space and recreational area provides an opportunity to make our neighborhood more livable, more sustainable and more equitable. This is a direct result of the hard work of the Harvard Allston Task Force, the neighborhood, and the City of Boston.”

At just under 15 acres, Smith Playground is a popular park located in Lower Allston with facilities for baseball, softball, soccer, street hockey, and basketball. The celebration marked the completion of Phase 1 renovations with a total budget of $6.4 million including $3.3 million funded by Mayor Walsh’s Capital Plan, $2.1 million from the Harvard Allston Public Realm Flexible Fund, community benefits from Harvard University, NHL Hockey is for Everyone, the Continuum project on Western Avenue by Samuels & Associates, and the Boston College Neighborhood Improvement Fund for the recently dedicated General Casey Amphitheater named in memory of Major General George W. Casey.

Today’s ribbon cutting at Smith aligns with the City’s Open Space and Recreation Plan, focusing on access, equity, and excellence – so that every neighborhood is home to beautiful spaces that serve both the people and the environment. The improvements to Smith Park are part of the over $230 million allocated through Imagine Boston 2030, the largest-ever capital funding for Boston parks.