“I am thrilled to celebrate the opening of a new Eliot School building,” said Mayor Walsh. “This school is a big part of the North End’s history, and will remain the heart and soul of this community for decades to come. Thank you to all our partners who made this possible, I look forward to all our students, teachers, families and the entire BPS community enjoying this beautiful building.”

Construction for the Upper School renovation project began in 2017. The renovation of this building, along with an earlier renovation project at the Salem Street building, represent a $40 million expenditure. The two projects are key investments for the North End community, and are reflective of the City of Boston and BPS’s commitment to provide innovative, modern learning environments to students.

The new, 42,000-square-foot Commercial Street facility opened in September. Interior and site improvements include a digital art studio, a technology classroom with robotics lab and laser cutter, media center, and 18 new classrooms that promote collaborative learning. The building also features eight brightly colored projecting bays, which create “learning nooks” geared for small group instruction and collaborative learning. Exterior upgrades include a new schoolyard with play structure and a brand new roof. The building also features a multi-purpose space that may be utilized by the community.

The renovations of both the Commercial Street and Salem Street campuses were designed by the Boston-based firm Finegold Alexander Architects. Daniel O’Connell’s Sons were the contractor for the project. Design and construction of the project was managed by the City of Boston Public Facilities Department.

“Every student deserves access to a 21st century education and Boston Public Schools is committed to providing all of our youth with safe, joyful and innovative learning environments,” said BPS Superintendent Brenda Cassellius. “This is an exciting time for the Eliot School, and demonstrates the immense value and strength of coordinated community engagement and collaboration for the benefit of our children.”

“It’s incredible that our students are learning about American history and social studies with a view of the Bunker Hill Monument and the U.S.S. Constitution,” said Boston School Committee Chairperson Michael Loconto. “This beautiful new building will facilitate hands-on, collaborative learning experiences for our students and will undoubtedly serve as a model for future BPS construction projects.”

The new campus is located on the Harborwalk, providing rear access to the building, and is also a short distance to public parks and all of the historic North End, with nearby MBTA access via North Station. The two other Eliot School campuses are also within walking distance, with students frequently traveling from one building to the others throughout the school day.

“The opening of the new Upper School is a true testament to our community’s and the City of Boston’s belief in public education and commitment to the Eliot School’s expansion,” said Principal Walker Griffith. “Every day our students, families, and faculty enter a magical, state-of-the-art building where they engage in learning and experiences on their path to being the change agents of the future. As the proud principal of the Eliot School, I am forever grateful for a community deeply rooted in the mission that a great education can transform students’ lives.”

The Eliot School is the oldest continuously-run school in the United States and has been located in the North End for its entire history. The school opened as the North Writing School in 1713 and has educated many famous Bostonians, including Samuel Adams and Paul Revere.

The Eliot School investment builds on Mayor Walsh’s commitment to improving Boston Public Schools across the city. This summer alone, BPS completed projects at nearly 50 schools, often in conjunction with the City’s Public Facilities Department, including construction in 29 schools to expand the My Way Cafe program.

In the past six years Mayor Walsh has strengthened the City’s relationship with the Massachusetts School Building Authority (MSBA), resulting in an unprecedented amount of collaborative work, leveraging over $100 million in reimbursement for projects like the new Dearborn 6-12 STEM Academy in Roxbury, renovation of Boston Arts Academy in the Fenway, and future projects at the Josiah Quincy Upper School and the Carter School in the South End. In addition, the City has been approved for 27 repair projects at various BPS schools since 2015 to create more energy efficient buildings by replacing roofs, windows and boilers.

About Boston Public Schools
The Boston Public Schools (BPS), the birthplace of public education in the United States, serves nearly 55,000 pre-kindergarten through grade 12 students in 125 schools. BPS is committed to transforming the lives of all children through exemplary teaching in a world-class system of innovative, welcoming schools. We partner with the community, families, and students to develop in every learner the knowledge, skill, and character to excel in college, career, and life. 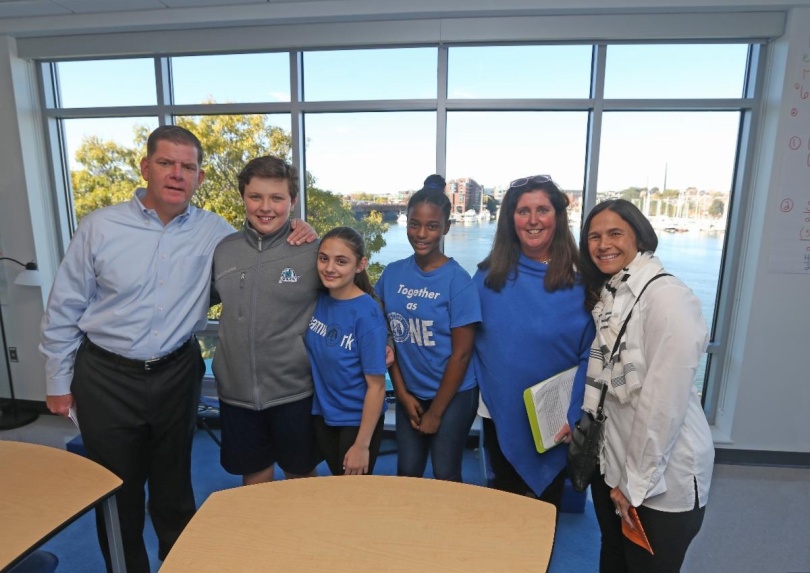