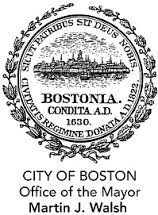 City of Boston leads Request for Information of large-scale renewable energy projects to meet the collective demand of 20 U.S. cities.

BOSTON – Tuesday, July 31, 2018 – Mayor Martin J. Walsh today is asking renewable energy developers and other interested parties to share ideas that could lead to one of the largest renewable energy projects of its kind in the country. The City of Boston released today a Request for Information (RFI) to obtain feedback from qualified renewable energy project developers with projects throughout the United States that could support the municipal energy demand of 20 cities included in the request. The total aggregate energy demand of all cities included in the request is nearly 5.7 terawatt-hours – enough to power over half a million US homes.

“Climate change is not an issue a city can solve by itself — but Boston’s leadership can be far-reaching,” said Mayor Walsh. “I applaud my colleagues in other cities for joining this effort to demonstrate our collective power in building a clean energy future, and I’m eager to see what is possible in terms of how we can power our cities and create more, clean energy jobs.”

“Cities wield the power to create demand and transform the energy market – and when we act together, we can show the world that environmental stewardship and economic prosperity go hand in hand,” said Los Angeles Mayor Eric Garcetti. “As a chair of Climate Mayors, I’m proud to stand beside Mayor Walsh in the work of amplifying the role of cities and upholding the goals of the Paris Climate Agreement.”

“As the energy capital of the world, Houston will play a critical role in transforming the way we power the future. Our city, the largest municipal user of renewable energy in the nation, is proof that even big cities in red states cities can act on climate and maintain a robust, growing economy,” said Mayor Sylvester Turner.

“This RFI is an example of visionary leadership and the ability to see the big picture from a national perspective is a breath of fresh air, and I applaud Mayor Walsh for calling on the private sector to come together with local leaders across the country in the fight against climate change,” said Chicago Mayor Rahm Emanuel. “Mayor Walsh understands that we will only succeed in protecting the planet for future generations when we work together towards our common goal to bring down carbon emissions as is laid out in the Chicago Climate Charter.”

Mayor Walsh formally announced his plans for the renewable energy initiative earlier this summer at the International Mayors Climate Summit in Boston. Mayors from across the country and around the world joined Mayor Walsh and leaders from public and private sectors to discuss actions taken by mayors to address climate change globally and in their own communities.

“Cities that invest in renewable energy are making the responsible choice for our global future and bringing our significant purchasing power to bear in the transition to a clean energy economy,” said Mayor Ted Wheeler of Portland, Oregon.

“All cities have a stake in the fight against climate change,” said Evanston Mayor Stephen Hagerty. “I’m proud to partner with Mayor Walsh and mayors from across the country to explore ways to collectively reduce carbon emissions in our cities. Global climate action begins at the local level, and by working together we can have a much greater impact.”

Mayor Walsh is the Co-Chair of Climate Mayors, a network of U.S. mayors that participated in a similar joint-city initiative last year that demonstrates the collective power of cities to advance climate goals. The Climate Mayors initiative, led by the City of Los Angeles, issued an Electric Vehicle Request for Information (EV RFI) with 30 other cities in efforts to aggregate municipal demand of electric vehicles across the country. The EV RFI demonstrated demand for nearly 115,000 vehicles of all classes, including trash trucks, street sweepers, semis, shuttles, and buses – with an estimated value of $10 billion to replace the entire fleet. The RFI received 40 responses across all vehicle segments, and is now moving into a formal procurement.

Boston is taking bold action on climate to become a carbon neutral, climate ready city as outlined in its updated Climate Action Plan. Boston’s Climate Action Plan serves as Boston’s roadmap for reaching its goals of reducing carbon emissions and preparing for the impacts of climate change. The goals are supported by Imagine Boston 2030, the first citywide plan in 50 years, that helps to ensure that climate plays a role in aspects of city planning.

The city’s current climate initiatives are laying the groundwork to advance its climate goals and to accelerate progress. Carbon Free Boston is analyzing the options and pathways to achieve deep decarbonization. The initiative is weighing the costs and benefits of technologies and policies across key action areas including electric power, buildings, transportation, and waste. As part of this effort, Zero Waste Boston is exploring pathways to turn Boston into a zero waste city through planning, policy, and community engagement.

Additionally, Climate Ready Boston is strengthening Boston’s climate change resilience with near- and long-term planning. It is actively advancing Boston’s vision of a resilient city through a comprehensive citywide vulnerability study, a community outreach program, and neighborhood-level implementation projects, including the installation of a flood wall in one of Boston’s most flood-prone neighborhood.

All of these initiatives will inform the upcoming update of Boston’s Climate Action Plan.