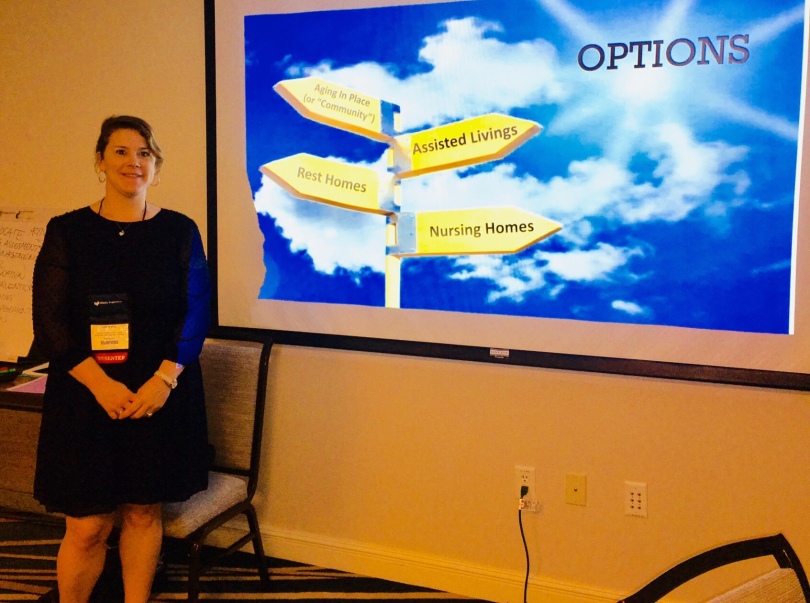 Having worked in that capacity before joining SCES, Bell said it was really gratifying to provide guidance and motivation for a group that’s doing important work.

Bell’s role at SCES focuses on connecting people with housing resources, which was also a topic in her presentation: “Meeting Your Residents’ Needs to Age in Place & Explore Other Housing Options.”

The Aging in Place portion of the discussion focused on connecting with resources, through elder service agencies and other providers.

Roughly 90 percent of older adults prefer to Age in Place, according to data from the non-profit National Association of States United for Aging and Disabilities (NASUAD). Elder Service agencies, such as SCES, provide access to wide range of information and resources that can help support that goal, explained Bell.

“It’s really about improving the quality of life, where people choose to live,” said Bell.

The second phase of the presentation focused on alternatives to Aging in Place, such as Assisted Living, Rest Homes and Nursing Homes. In addition to providing basic information about each of those options, Bell advised the focus should be on working with residents to discuss how and where they want to live.

“I wanted to give some knowledge of the landscape, for when they need to have those conversations in the future,” said Bell.

Kristin Bell is an Elder Care Advisor and Housing Specialist in the SCES Aging Information Center. Prior to joining SCES, Bell was an award-winning resident service coordinator at Clarendon Hill Towers in Somerville.

Somerville-Cambridge Elder Services (SCES) is a non-profit agency that supports the independence and well-being of older people in Somerville and Cambridge. For more information, visit eldercare.org, follow us on Facebook and Twitter, or contact the SCES Aging Information Center at 617-628-2601 for free advice and guidance.