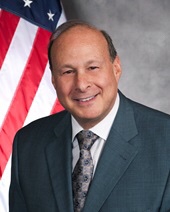 An unusual week at the Statehouse ended with Senate President Stan Rosenberg (D-Amherst) reading a statement to a throng of reporters about the allegations in the Boston Globe that his husband, Bryon Hefner, groped three men and kissed another one against his will.

“I was shocked and devastated to learn of the allegations reported in the Boston Globe,” said Rosenberg, reading from a statement. “Any time there are allegations of sexual harassment and assault, we should all be shocked and devastated. Our hearts must go out to anyone who has been hurt, and I encourage anyone, anywhere, any time to come forward. My heart goes out to anyone who may have been hurt, and I am committed to helping anyone who has been harmed. This has been the most difficult time in my political life, and in my personal life.”

The Globe reported last week that the anonymous accusers include a lobbyist, a Beacon Hill aide, a public policy advocate and a man who worked on Beacon Hill. The Globe story also included claims that Hefner has said he speaks for Rosenberg and talks about Senate business with legislators and their staffs.

Hefner issued a statement through an unnamed attorney, saying he was shocked to learn of the allegations.

“To my knowledge, no one has complained to me or any political or governmental authority about these allegations which are now surfacing years afterward,” read the statement. “As one can imagine, it is incredibly difficult to respond to allegations by unnamed and unidentified individuals that involve an extended period of time, particularly in the current environment.”

Gov. Charlie Baker held a brief press conference and called for an immediate and thorough investigation by the Senate. “Frankly I’m appalled by the allegations,” said Baker. “They’re disturbing. They’re distressing. And I really felt for the people when I read the story, who came forward. It’s really important for the Senate as soon as possible to conduct a thorough investigation into these allegations.”

Baker continued, “We should have a zero-tolerance policy with respect to sexual harassment and sexual assault — period. Especially in the workplace.”

Senate Majority Leader Harriette Chandler (D-Worcester), second in command in the Senate, is taking the lead in the hiring of a special investigator to look into the accusations. Rosenberg has recused himself from the investigation.

“These charges are very serious and very disturbing, and I am shocked and saddened,” said Chandler. “I appreciate that President Rosenberg has recused himself from playing any role in this investigation. While the Senate President will be recused in this matter, he will remain in the Office of the Senate President and retain his responsibilities for all other matters before the Senate.”

“Bryon is seeking professional help for alcohol dependence, which will include his being admitted to an in-patient treatment center very shortly,” Rosenberg said. “The last 24 hours have been heartbreaking and difficult. I have spent most of those hours processing those allegations, and I will continue to do this as he prepares to enter treatment … I am looking forward to fully cooperating with the investigation and look forward to the findings. I am confident that the investigation will find that Bryon had no influence on the workings of the Senate.”

Rosenberg did not take any questions and quickly returned to his office following his statement. “Today because of the imminent investigation I have been advised not to answer questions at this time,” Rosenberg said.

Rosenberg, 68 and Hefner, 30 were married in 2016. The couple met when Hefner worked for a short period of time in Rosenberg’s office. Rosenberg has credited Hefner with helping him come out as a gay man.