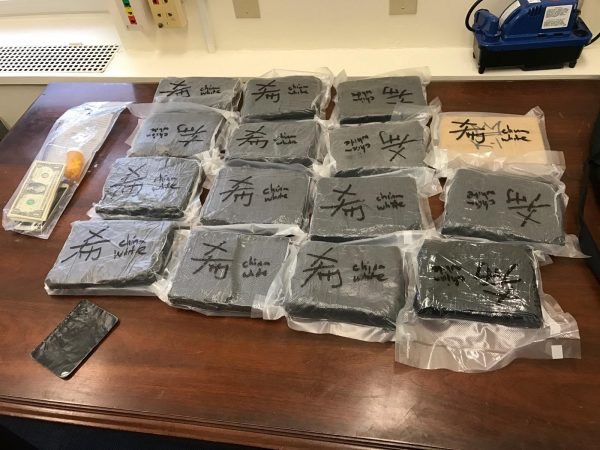 Methuen Police today arrested a man who was in possession of 15 kilos of fentanyl, worth approximately $1.2 million. (Photo Courtesy of Methuen Police)
METHUEN — Mayor Stephen Zanni and Chief Joseph E. Solomon report that the Methuen Police Department today arrested a man who was allegedly in possession of 15 kilos of fentanyl.
ROBINSON ROJAS-ROSARIO, AGE 32, OF QUEENS, N.Y., is arrested and charged with Major Trafficking of Fentanyl.
At approximately 8:41 a.m. on Monday, Jan. 2, Methuen Police received a 911 call reporting a man with a gun in a taxi on Glen Avenue. The caller was able to give a detailed description of the man who allegedly got out of the taxi, retrieved a gun from a duffel bag and concealed it on his person before re-entering the vehicle.
Upon arrival, officers were able to locate a man matching the 911 caller’s description sitting in the backseat of a taxi with a duffel bag on the floor next to him. Police identified the man as ROJAS-ROSARIO.
An initial investigation led to the discovery of 15 kilos of fentanyl, worth approximately $1.2 million.
“Our streets are safer now,” Mayor Zanni said. “Any effort we can make in fighting the opioid epidemic is progress, but removing such a large amount of this deadly substance from our streets is a huge success.”
This arrest comes just days after a 10-month-old Methuen baby was exposed to fentanyl and hospitalized.
“Thanks to the keen observations of this witness and the quick response from police, we were able to take an extremely large amount of fentanyl off of our streets,” Chief Solomon said. “This is a great example of why we tell people to say something if they see something.”
ROJAS-ROSARIO is being held on $100,000 bail at the Methuen Police station pending his arraignment at Lawrence District Court.