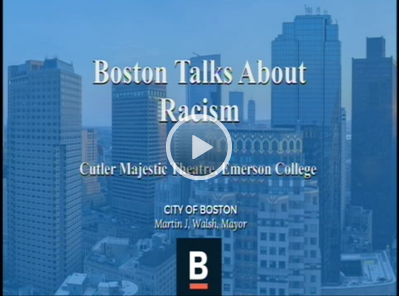 Watch the video from today’s discussion.

BOSTON – Saturday, November 19, 2016 – Mayor Martin J. Walsh today hosted a public discussion to discuss racism in Boston and how we acknowledge our past as we look to our future in order to become a more socially cohesive and resilient city. The discussion was attended by over 600 residents, and served as the kick-off to a citywide conversation about racism. Additional conversations will take place in neighborhoods across the city in early 2017.
“At this moment in history, Boston will take a stand. We’ll answer the call to put the safety, the rights, and the equity of everyone in our city at the top of our agenda, every day,” said Mayor Walsh. “If we want to be a strong city, we have to be able to depend on each other, trust each other and understand each other. I want to thank each and every person who took the time to attend, and those who have been having this conversation for years. Together we will grow the conversation, one person at a time, and build bridges of understanding that can become bonds of healing.”
The discussion was supported by partners including 100 Resilient Cities – pioneered by The Rockefeller Foundation, the Greater Boston Chamber of Commerce and Emerson College.
As part of the dialogue, Mayor Walsh in partnership with 100 Resilient Cities, released “The Blueprint: A Preview of the Principles & Framework for Boston’s Resilience Strategy” which helps set the foundation for the release of Boston’s Resilience Strategy in early 2017. The Blueprint for Boston’s Resilience Strategy provides a shared framework to remove the barriers of racism that hinder Bostonians from having access to opportunity and support to thrive from childhood to retirement.
The Blueprint identifies recommended visions and goals, built upon the racial equity framework, to achieve a more resilient Boston. They include:

Reflective city, stronger people: A Boston that reflects upon its history and confronts present realities of racism in daily life and during emergencies, to learn from and reduce the impact of trauma on individual and community health and well-being.

Equitable economic opportunity: Access to economic and social pathways that support closing the wealth gap to ensure our economic security is not determined by our race or ethnicity.

Connected, adaptive city: Increased connectivity for communities of color while improving critical infrastructure for all Bostonians.

“A truly resilient city is one that works to achieve equity: ensuring that important services reach all residents, including the most vulnerable; providing access to opportunity for all and actively fostering cohesive communities,” said Otis Rolley, 100 Resilient Cities Regional Director for Africa and North America. “Boston is offering its residents, and its nation, a glimpse into what’s possible when challenges are acknowledged openly and honestly.”
Earlier this year, Mayor Walsh and 100 Resilient Cities convened the first-ever Transatlantic Policy Lab (TAPL) to assess inequality in the city. The meeting of city and nonprofit officials helped address the ways inequalities in income and opportunity affect Boston’s shared resilience-building efforts.
In August 2015, Mayor Walsh announced Dr. Atyia Martin as the City of Boston’s first Chief Resilience Officer (CRO), a position created to lead citywide resilience efforts to help Boston prepare for, withstand and bounce back from the ‘shocks’ – catastrophic events like floods, infrastructure failure and acts of terrorism – and ‘stresses’ – slow-moving disasters like persistent racial and economic inequality, lack of affordable housing and unemployment – which are increasingly part of 21st century life. A member of the 100RC network since 2014, Boston’s resilience-building efforts place a unique focus on social resilience in a city affected by historic and persistent divisions of race and class.
About the Mayor’s Office of Resilience and Racial Equity

The Mayor’s Office of Resilience and Racial Equity leads efforts to help Boston plan for and deal with catastrophes and slow-moving disasters – like persistent racial and economic inequality – that have become part of 21st century life. For more information about the office, please visit our website.
About 100 Resilient Cities-Pioneered by The Rockefeller Foundation

100 Resilient Cities – Pioneered by The Rockefeller Foundation (100RC) helps cities around the world become more resilient to social, economic, and physical challenges that are a growing part of the 21st century. 100RC provides this assistance through: funding for a Chief Resilience Officer in each of our cities who will lead the resilience efforts; resources for drafting a Resilience Strategy; access to private sector, public sector, academic, and NGO resilience tools; and membership in a global network of peer cities to share best practices and challenges. For more information, visit: http://www.100ResilientCities.org.