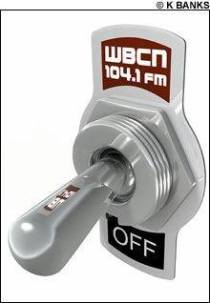 Arlington High School, 869 Massachusetts Ave
ARLINGTON, MA – On Wednesday, October 16, at 7:30pm, author and long-time Boston disc jockey Carter Alan comes to Arlington Community Education’s Conversations series to discuss his new book, Radio Free Boston: The Rise and Fall of WBCN. This event will take place in the media center at Arlington High School, 869 Massachusetts Ave, and will be moderated by music critic Tim Riley. There will be ample time for questions from the audience. Copies of Radio Free Boston will be available for purchase.
A DJ at WBCN from 1979 until 1998, Mr Alan is also the author of several previous books, including Outside is America and The Road to Pop, both about the band U2. Now a music director at WZLX, Mr Alan hosts the mid-day show and “Sunday Morning Blues”.
Blaring the Cream anthem “I Feel Free,” WBCN went on the air in March 1968 as an experiment on the fledgling FM radio band. It broadcast its final song, Pink Floyd’s “Shine on You Crazy Diamond,” in August 2009. In between, WBCN both pioneered and defined progressive rock radio, sustaining a vibrant music scene that launched such artists as the J. Geils Band, Aerosmith, James Taylor, Boston, The Cars, and The Dropkick Murphys. Radio Free Boston is the story of a city in tumult, of artistic freedom, of music and politics and identity, and of the cultural, technological, and financial forces that killed rock radio.
Other events in the series:
October 2, 7:30pm. Bestselling author Larry Tye discusses his most recent book, Superman: The High- Flying History of America’s Most Enduring Hero, with Teresa Hanafin of the Boston Globe.
October 23, 7:30pm. MIT Professor (emeritus) Robert McKersie discusses his new memoir A Decisive Decade: An Insider’s View of the Chicago Civil Rights Movement with former Arlington High School principal Charles Skidmore.
November 12, 7:30pm. Bestselling author Tom Perrotta discusses Nine Inches, his new collection of short stories, with Fortune editor-at-large David Whitford.
The events in this series are co-sponsored by the Arlington Advocate and Robbins Library. The Arlington Human Rights Commission is an additional co-sponsor of the October 23 event. Admission is $10 for Tom Perrotta’s appearance, $5 for all others. Pre-registration is available at www.ArlingtonCommunityEd.org or by calling 781 316-3568. Walk-ins are welcome as space permits. Media are invited to attend these events free of charge.