BOSTON –A major update to the Boston Public Schools Code of Conduct emphasizes the importance of giving all students the opportunity to make academic progress by strengthening a tiered system of progressive discipline and student supports. The Code has been updated after an 18-month collaborative effort by the Code of Conduct Advisory Council, the Boston Parents Organizing Network and the Boston Student Advisory Council.

Students and parents played a key role in the revisions.

“Our schools are safer than ever and it’s because we have students, parents and teachers who care about stopping problems before they begin. The fact that these changes were developed by students and parents, who know our families best, means it is yet another thing our public schools are doing right.” said Mayor Thomas M. Menino.

“Following up on our recently approved wellness policy, which focused on the physical health of our students, the school committee was pleased to unanimously support its revised Code of Conduct focusing on the safety of our students,” O’Neill said. “We believe both could be national models- for the impact on our students as well as the way they were developed, through working with a very broad-based coalition of knowledgeable and experienced partners.”

John McDonough, Boston Public Schools Superintendent also applauded the update to the Code of Conduct. “It represents a lot of hard work and thoughtfulness by stakeholders who were guiding by our mission to focus on children,” he said.

The new revision gives students the opportunity to make academic progress during suspensions and expulsions and provides due process for students facing potential suspension or expulsion.

Boston has become the first school district to revise its Code of Conduct to implement the new state law, Chapter 222, requiring schools to exclude students only as a last resort, said Thomas Mela, co-chair of Systems, Policies and Procedures (SP&P), a subcommittee of the Boston Public Schools Code of Conduct Advisory Council (COCAC). He is also a senior project director of the Massachusetts Advocates for Children.

“Boston has provided leadership and paved the way for other school districts to align their Codes of Conduct with the new state law,” Mela said.

Dawn Ash, chair of COCAC and member of the SP&P subcommittee, emphasized the tremendous community effort behind the changes to the Code.
“More than ninety parents, students, activists, community members and BPS administrators, working together over a three-year period, had a hand in bringing about these changes,” she said. “The new Code truly reflects this broad community input and I am proud of all the work we’ve accomplished together.”

The School Committee approved the revision during a regular meeting on Sept. 4., marking the second time since 2010 that the Code of Conduct has been updated.
“We are very encouraged that Boston Schools included the Boston Parents Organizing Network as an integral part of the team that put together the new Code of Conduct,” said Myriam Ortiz, the network’s executive director. “That speaks volumes in terms of the direction the district is headed in- engaging parents into the dialogue.”

The revisions three years ago emphasized the importance of progressive discipline as an alternative to suspensions and expulsions. Since that time, our schools across the city have become safer: arrests by the Boston School Police fell from 464 in the 2007-08 school year to 163 in 2012-13, a 185% decline.

As part of the 2010 revision process, BPS committed to reexamining the Code of Conduct every few years.
The code also includes a revised set of consequences for violations of the cell phone policy. Previously, for second and subsequent violations, students were prohibited from bringing phones back for the remainder of the year, but under the new policy, violators must drop off their phone at the main office at the beginning of the day and pick it up at the end of the day for no more than 10 days.

The Boston Public Schools, the birthplace of public education in the United States,
serves more than 58,000 pre-kindergarten through grade 12 students in 128 schools. 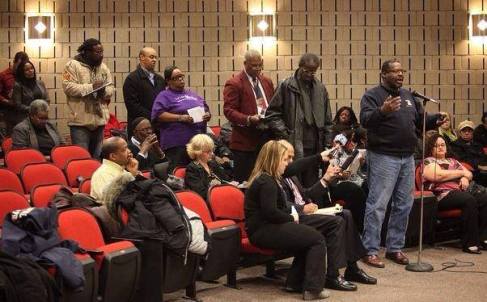